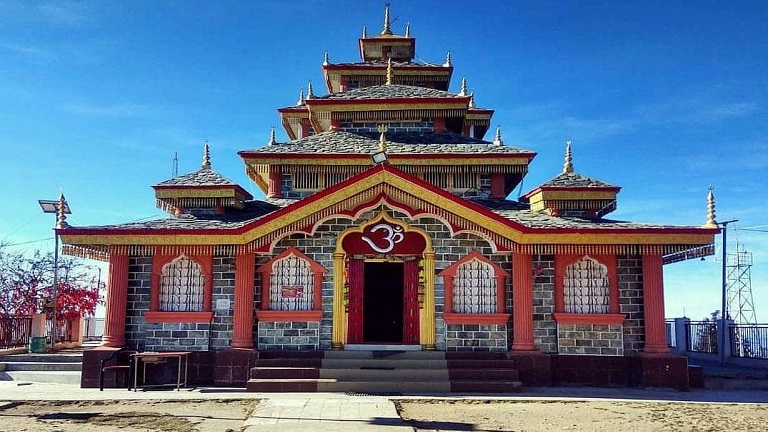 Talking about mountains and hill stations, Mussoorie cannot be left out from the list by any stretch of the imagination. In fact, it will have to be one of the contenders for the top three hill stations in India if not the top most, which it could very well be.

The reasons for this are many. A stunning view of the Himalayas, lush green views of the Doon valley, old world charm that revels itself in the architecture of the structures of the British era and extremely favorable climate especially in the hot summer months are a few that can be immediately listed.

Apart from the many picturesque attractions that Mussoorie has to offer, it is also a haven for many sacred sites. Temples, shrines, mosques, churches, and monasteries are all harmoniously present in Mussoorie.  Let’s explore the many places of worship that you can visit in Mussoorie.

Famous Temples In & Around Mussoorie

Situated on Benog Hill, the temple is dedicated to Jwala Devi, who is considered to be one of the many incarnations of Maa Durga. You can reach the temple after a 2-kilometre trek through dense but beautiful paths. The top of the hill offers views of the breathtaking Shivalik Range and Yamuna Range.

The beautiful Hindu temple is located near Dhanualti. To reach here, you can do the 3 km trek from Kaddukhai. The entire trekking route is picturesque and offers some amazing views as you emerge from the dense foliage. The temple is famous across Mussoorie as the festival of Ganga Dusshera is held here every year.

Dedicated to the god of snakes, this ancient temple is located on Cart Mackenzie Road. The temple pays homage to Lord Shiva, who wore snakes around his neck. The festival of Nag Panchami is held with great celebrations at the temple. The temple is visited by devotees and tourists alike.

This beautiful church is named after Dr. Samuel Kellogg – an American missionary who strived to help in the development of Mussoorie. The gothic architecture of the church is a sight to behold and attracts tourists from everywhere.

Considered to be one of the oldest churches in the Himalayan region, Christ Church is a popular church located in central Mussoorie. Built during the British era the church’s architecture is a beautiful reflection of the history of the times.

Peace welcomes one and all who visit the architectural marvel that is Union Church. The church was built in 1874, with strong influences from colonial architecture. The imposing building is one that’s visited by tourists and is a popular spot in Mussoorie. Head here to experience peace and tranquillity.

Buddhist beliefs, cultures, and architecture have left a strong mark in Mussoorie. Here one can visit many famous Buddhist temples and monasteries, including:

Situated on top of a cliff, the Shedup Choephelling Temple is a glorious monastery. It is one of the first monasteries to be built in India and consecrated by the Dalia Lama. The visit to the monastery will give you a glimpse into the rich architecture of the Tibetan people, their belief systems and make you feel at peace. Head here to also get a breathtaking glimpse of Benog Hill.

Your vacation in Mussoorie will be incomplete without relishing the many delicacies the region has to offer. You can taste varied cuisines and local foods from the most famous restaurants in Mussoorie. You can dine at Kalsang Friends corner for some authentic Tibetan food, visit Cafe Ivy for a quick bite and wonderful view, gorge on omellets at the famous Lovely Omellete Centre, and more. When in Mussoorie your taste buds will never be disappointed.

Visiting Mussoorie in the monsoon season can be very refreshing, especially if one is a rain lover. With the summer crowd on its way out, the hotels in Mussoorie are not as full and one can enjoy a relaxing break with minimal crowd and more attention from staff. Plus, the lush green of the mountains and the valley is even more enhanced leaving a fresh feeling in the air.

A not-to-miss spot is Cloud’s End. With 2000 acres of Oak and Deodar forest and a heritage hotel, this destination is a must visit for those who love wildlife and nature. There are activities like nature and forest walks, hill climbing that help one seep into the all-consuming experience of being closest to nature.

Selling Mussoorie to a traveller is not the hardest thing in the world, what’s more, important is to experience it. In all its full glory, the queen will steal anyone’s heart and lead to a love affair not to be forgotten easily.

The Ultimate Guide to Corporate Event in Hotels